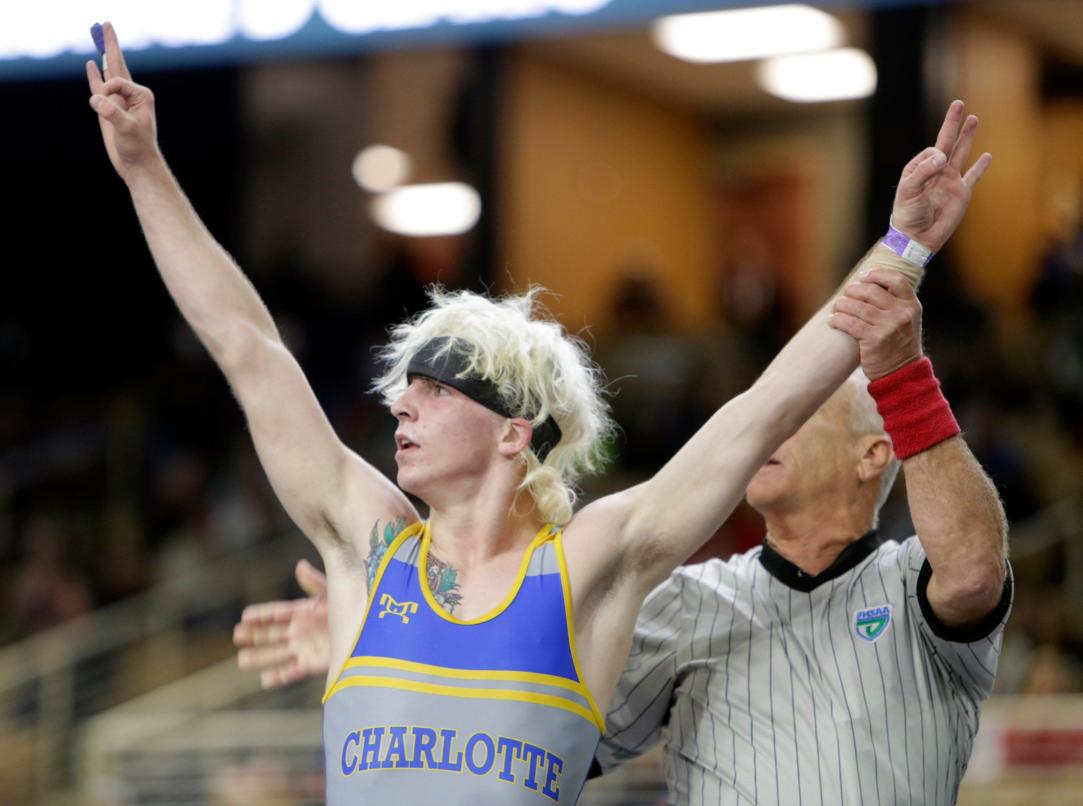 KISSIMMEE – Three area wrestlers overcame adversity to take the top spot in their respective classes on the podium.

North Port High’s Dominic Joyce lost his father a couple of months before the wrestling season began and persevered to win the Class 3A 182-pound weight class at the FHSAA Championships on Saturday at Silver Spurs Arena.

Charlotte High’s Andrew Austin relied on mental toughness, grit and tenacity to capture the Class 2A 126-pound crown, his third state title and leave a legacy as one of the top wrestlers in Tarpon history.

After winning the state title a year ago, Charlotte finished second in Class 2A with 147 points, behind only Tampa Jesuit’s 189.

“State runnerup ain’t too shabby,” Tarpons coach Evan Robinson said. “We had a little rough spot. I can’t be more proud of these guys. We had seven guys in the top four. I don’t know if we’ve ever done that. Nine guys placing. They have been working hard all season and they peaked here.”

Here is a breakdown of the area wrestlers in the championship bouts:

Two of the three points scored by Fernandez (32-9) came on stalling infractions on Joyce (53-2) in the third period.

“I stalled a little bit too much,” Joyce said. “I did pretty good.”

Considering his father, John, passed away a couple of months before wrestling season.

“It was kind of a sucky year, I have to say,” Joyce said. “I knew he wanted me to keep working. Toward the end of the season, I kinda felt it mentally.”

“He’s got that extra on him,” said Hill, who had known him for the five years he has been at North Port and called John his best friend. “We’re just so happy he was able to go ahead and made his father proud.”

A junior, Joyce said he will probably return to wrestling Monday or Tuesday.

“I love wrestling,” said Joyce, who became the second Bobcat to capture a state title, the first since Dacoda Flenard in 2016. “That’s what kept me going.”

It was not pretty, but Schyck made it back-to-back undefeated state championship seasons.

“It’s been a grind like last year,” Schyck said. “Maybe more so.”

Schyck wrestled last year with a torn anterior cruciate ligament. He had two surgeries to repair it: one that cut the patella tendon to make a ligament and one to connect the ligament.

“There was not any pain involved as long as I had that brace last year,” Schyck said. “After two surgeries, I have a lot of atrophy in my leg. So I’d say it was a little harder.”

He went 118-1 during his past three seasons, only losing the title match as a sophomore.

“After he lost the final to Bailey Flanagan as a sophomore, he learned how to win,” Manta Rays coach and Lance’s father Mike Schyck said. “He does this thing where he puts his thumb on the guy’s neck and he can’t do anything after that. Lance is pretty tactical.”

After a scoreless first period, Schyck (43-0) scored an escape, takedown and three-point nearfall in the second period to take command over Nicolosi (36-6).

“I found a way,” said Lance Schyck, who was wearing three knee pads. “This is the first three-day tournament. I only wrestled one two-day tournament this year. To wrestle three days, it was grueling on my knee. But I found a way.”

“He did enough to win that,” Mike Schyck said.

Nicolosi got a meaningless takedown late in the third period.

“The pressure to do this again,” said Mike Schyck, a two-time state champion and one-time runner-up. “He’s been following me. It sucks he had to do that.”

Lance Schyck is the second four-time place winner at Lemon Bay; Mike was the first.

“He was chasing me,” Mike Schyck said. “There was a lot of pressure on him to do it. The stress is off now.”

“Experience pays off,” Robinson said. “Andrew was fired up and did his job very well.”

A Central Michigan signee, Austin (51-2) turned in as dominant a performance as possible over a six-minute stretch in winning his third state title.

“It means the absolute world to do that three times,” Austin said.

He jumped out to a 5-0 lead after one period and opened an 11-0 advantage after two periods. It was just a matter of whether he would get a technical fall for leading by 15.

Austin came up just short, getting three more points in the third period. He even flashing a smile as the time ticked down in his major decision.

“I was going to go for it with 10 seconds left,” Austin said. “But I wanted to stay smart and not risk anything stupid. So I just held out.”

Austin experience a myriad of emotions this weekend.

“Some nerves, happiness, sadness,” Austin said. “That was my last time. I can’t find the words yet to describe. Those fans, that Charlotte family means so much to me. It means the world to do that. That’s the way to end it.”

He pinned Tabor (52-4) in the Captain Archer Memorial final.

“It does not get old,” Austin said. “Especially this year, the last time representing Charlotte. It meant the world to do that one more time for Coach Robinson and all those fans up there. That’s my family.”

It was a frustrating match for French, who fell behind 2-0 after being taken down in the first period.

In a battle of sophomores, Lermer (41-6) went up 4-0 in the second with another takedown and then went into a shell. French (46-9) received a stalling point to trail 4-1 entering the third period.

French started on the bottom and immediately escaped. Lemer got his third takedown to go up 6-2. French then got an escape and received another point for stalling putting him in position to tie with a takedown.

It did not happen as Lermer hung on for his fourth career victory over French.

After being taken down in the first minute of his bout, Gonzalez (50-3) got right back in with a reversal before the end of the first period to tie at 2-all.

Starting on the bottom to start the second period, the senior Gonzalez never got to his feet. A sophomore, Heap (53-5) flipped him on his back for a three-point near fall before finishing him off with 35 seconds left in the middle period.

This bout was destined to go to overtime from the start.

Hodge controlled the slow tempo and did not allow himself to get into a position where he could get in trouble.

Hodge had an escape in the second round and permitted Hoffman to escape to begin the third.

After a minute overtime was scoreless. Hodge rode Hoffman (59-3) for the entire 30 seconds of the first overtime. A junior, Hodge (45-6) then escaped in the second overtime and stayed out of harm’s way the rest of the match.

Moder took Alden down in the first period to set the tone for the match. Starting down to start the second period, Moder got a quick reversal and two-point nearfall to go up 6-0.

Palmetto High director of athletics Bryan Wilkes, the Tigers’ former wrestling coach, was named to the Florida Chapter of the National Wrestling Hall of Fame.