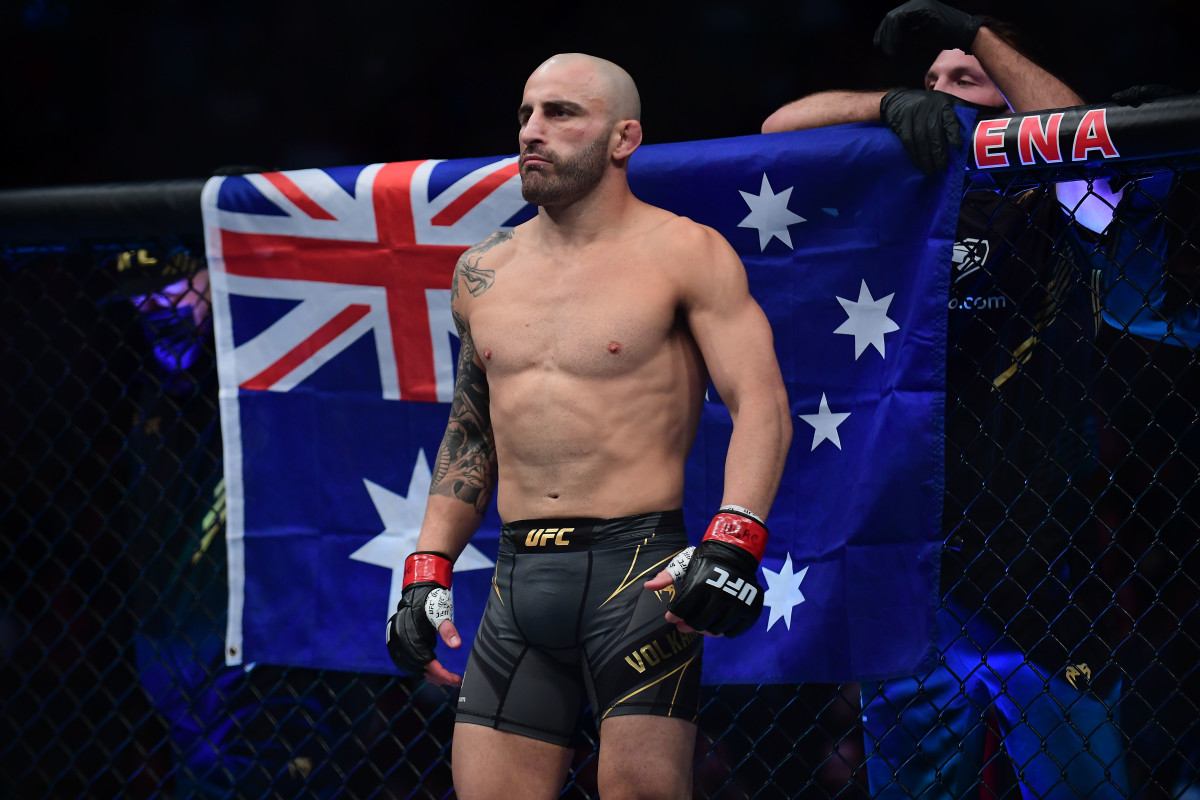 UFC 273 on Saturday features two title bouts and a chance to see a rising star.

Alexander Volkanovski defends his UFC featherweight gold against Chan Sung Jung, whose name has practically been replaced by his Korean Zombie nickname. Though that is the main event, the most highly anticipated bout of the evening is the Aljamain Sterling-Petr Yan rematch, which will determine the undisputed bantamweight champion.

After Yan intentionally knocked out Sterling with an illegal knee in their last bout 13 months ago, 273 stands as redemption for Sterling, who wants to prove there is no better bantamweight in the world–and make Yan suffer in the cage. The juggernaut Khamzat Chimaev also seeks to continue his destruction, which will be an incredibly challenging task against perennial welterweight contender Gilbert Burns.

Here are some of the more pressing questions approaching 273:

UFC 273 is another building block for the ongoing greatness of Alexander Volkanovski.

Volkanovski (23-1) has captured his past 20 straight bouts, dominating en route to becoming the undisputed UFC featherweight champion. If he can defeat number-four ranked Sung Jung (17-6), it will mark his third successful defense of the title. Despite his opponent being ranked lower in the division than his previous two opponents–Max Holloway and Brian Ortega–he refuses to take the Korean Zombie lightly.

“I’m here to be better than I was yesterday,” Volkanovski said. “That’s my main focus. Even though I’m not the underdog, I’m fighting to be better. Being the favorite and all that stuff, it doesn’t mean anything to me. And I am going to be better in the cage than I was last time.”

The victory against Ortega last September at UFC 266 was Volkanovski’s finest moment thus far in the Octagon. That fight was the result of years of sacrifice and a comprehensive devotion to his craft over the last three decades.

“It reminded me of wrestling with my brother on my father’s bed,” said Volkanovski, who overcame Ortega’s vast arsenal of submissions. “I refused to quit then, too. I remember that endurance and perseverance. The way I was brought up developed my never-give-up attitude. I can go through adversity, and I’ll still come out on top.

“And these contenders are always constantly climbing. I’m aware of that and I know what I’ve done isn’t enough. I need to be better than I was last time.”

Volkanovski posted highlights of his workouts leading into 273, and it is clear that he is vastly prepared and in peak physical condition entering Saturday’s title fight.

“I refuse to take the foot off the pedal,” Volkanovski said. “I’m still working. I don’t care if I’m at the top of the mountain. I’m here to test myself and keep climbing.”

What is the key to victory for Aljamain Sterling?

Wrestling is the key for Aljamain Sterling in the bantamweight title unification bout. He needs to be relentless in his attack of Petr Yan, who–for all his success– has yet to defeat a wrestler as elite as Sterling (20-3).

Yan (16-2) did have Sterling decisively beat before getting himself disqualified in their first meeting, but Sterling attributes that poor performance to nutritional mistakes on the day of the fight.

If Sterling is in successful, he’ll dictate the fight through his grappling, which is where he developed the “Funk Master” nickname.

“Funk Master came from my college roommates,” said Sterling, who wrestled at Morrisville State College and the State University of New York College at Cortland during his collegiate career. “I mirrored a lot of my wrestling style in college from Ben Askren. I watched a lot of videos and broke down a lot of his tapes. I took a lot of notes and went to the wrestling room to try to re-enact the way he would troubleshoot positions. I didn’t want to take his name, Funky, so it was kind of a tribute to him and a tribute to wrestling. My roommates liked Funk Master, and it stuck. That was the birth of the Funk Master.”

Based off the odds, which has Khamzat Chimaev as an astronomical favorite, then no, Gilbert Burns cannot beat his undefeated opponent.

Just don’t tell that to Burns.

“Every single guy he’s fought isn’t my caliber, doesn’t have the same power in their hands or the experience,” Burns told Sports Illustrated last week. “This will be very tough—it won’t be an easy fight, but I’m confident I will get the win.”’

Burns (20-4) has only tasted defeat once in his past eight fights, which was a close encounter against reigning champ Kamaru Usman. Chimaev (10-0) has not faced anyone near the elite level of Burns, and this is expected to be last much longer than Chimaev’s instant destructions.

On paper, Chimaev appears to be too dominant, even for Burns. But facing a top-five opponent is a whole different set of circumstances–just ask Giga Chikadze about his fight against Calvin Kattar. This will be a test unlike any other for Chimaev, and far from a certainty that he will win.

What stands out on the rest of the card?

Dern (11-2) is coming off a loss, which she suffered last October against Marina Rodriguez. In order to keep her title hopes alive, as well as her number-five ranking, she will need to secure a victory against Torres (13-5). Now seventh in the division, she has won her past three fights–and could break into the top-five with a win.

Pichel and Madsen have the potential to combine for an explosive opener. Madsen (11-0) continued his winning streak last August in a split decision victory against Clay Guida. He is a superb wrestler, and he’ll look to exploit that strength against Pichel (14-2), who is coming off impressive victories against Roosevelt Roberts, Jim Miller, and Austin Hubbard.

The early prelims feature Alexey Oleynik seeking win number 60 in a heavyweight contest against Jared Vanderaa. Oleynik (59-16-1) has dropped his past three bouts, but this meeting with Vanderaa (12-7) is an opportunity to reach new heights in the Octagon. Aspen Ladd-Raquel Pennington is another bout that stands out on the ESPN prelims.

273 is built around its top three bouts, but this has the makings of an extremely solid card set of fights.

• The Underground: Corey Anderson Ready to Take Bellator Belt Like a Thief in the Night