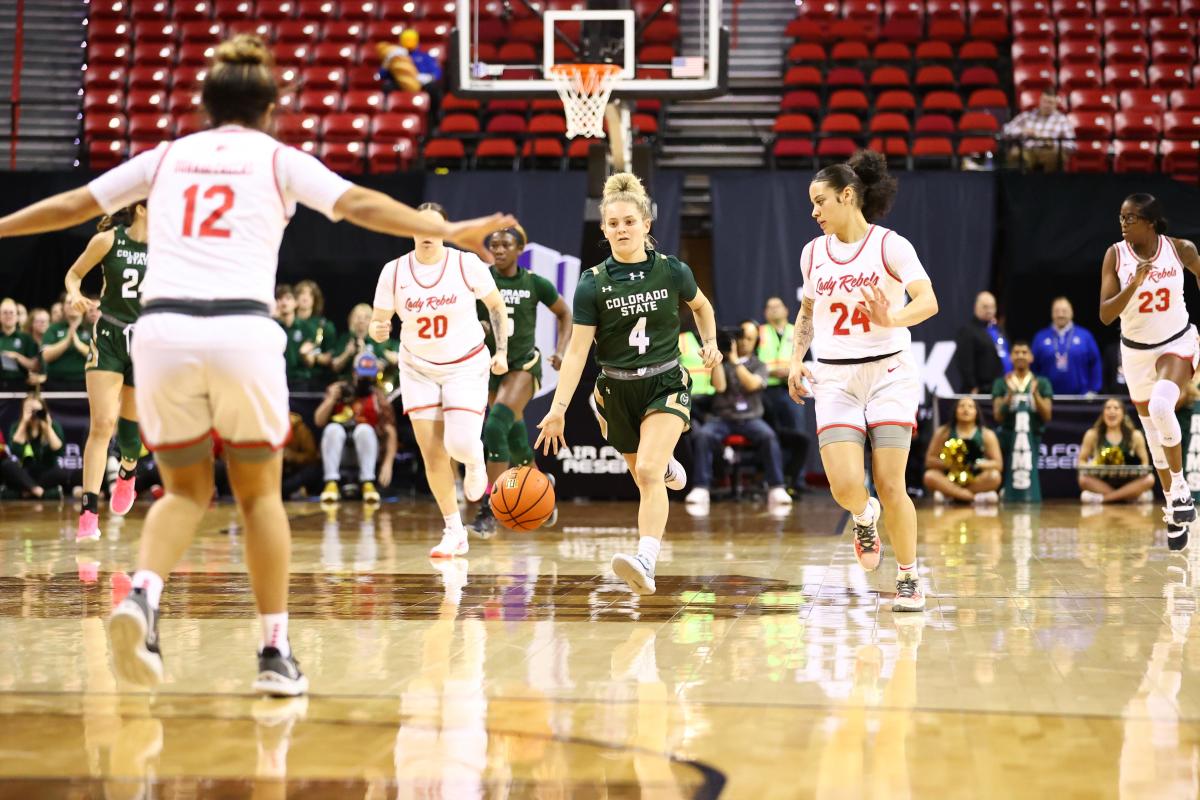 LAS VEGAS — The emotions strained on the faces of the players.

They put everything into this one.

Not just this one game, but the entire tournament run.

The Colorado State women’s basketball team would not disappear.

The Rams weren’t supposed to be playing Wednesday night, much less making the Thomas & Mack Center crackle with nervous energy as the top-seeded hosts struggled to muzzle the underdogs.

No. 6 CSU would not go quietly with a Cinderella trip to the NCAA Tournament within reach.

And the Rams did not go quietly, but their hands were just kept off the Mountain West championship trophy by a stellar UNLV team in a 75-65 win for the top seed.

“We had a lot of fun this tournament. Like, a lot of people didn’t expect us to get here, but we clicked at the right time and I really enjoyed this whole week with my team,” CSU’s Karly Murphy said.

But UNLV (26-6) settled in and used its dynamic attack to take a 38-31 halftime lead. CSU briefly cut it to three early in the third quarter before it ballooned back to a 13-point advantage for UNLV.

Go away? Nah, not these Rams.

They lost their final three games of the regular season in close calls to slide to the six-seed and out of a first-round bye. Still, there was no sign of fading.

“We kept practicing good. I think all 12 kids came to work every day and they had fun in the gym,” CSU coach Ryun Williams said. “So, these are long seasons. It’s a grind, and it’s easy to kind of fade down the stretch, especially if you kind of have some tough losses late. But they kept playing for each other. There was a joy on the court even when we were preparing for this thing, and it just carried over.”

As they did during the season, the Rams clawed back in this game. An 8-0 run to end the third quarter pulled CSU within five points.

CSU cut it all the way to one (62-61) inside 5 minutes and forced a miss on the next possession but couldn’t grab the offensive board.

The dagger came with 42 seconds left. UNLV called a timeout with a second on the shot clock and up four on the Rams. Essence Booker hit a corner 3-pointer to seal the win and cap a thriller of a showcase basketball game.

Here are three takeaways from the Rams’ close call:

Booker was named tournament MVP, and she showed why Wednesday night.

The UNLV guard hit 10 of 25 shots for 25 points. She had five rebounds and five assists and made a play seemingly every time CSU made a run.

Desi-Rae Young had 14 points and seven rebounds to help UNLV outscore CSU 34-28 in the paint.

UNLV was the dominant Mountain West team in the regular season and proved their worth again to win the tournament at home.

Local basketball: Here’s how No. 1 Windsor girls basketball stacks up in their return to 4A Final Four

Winning four games in four days as a lower seed is a monumental task. The Rams would have had to — and almost did — beat the top three seeds on three consecutive days.

CSU was able to use the bench in the first-round blowout over San Jose State, but the rotation was cut to seven the rest of the tournament.

The Rams played 160 minutes of basketball in these four days. Look at these minute totals:

Yet they still played in the fourth quarter Wednesday at an elite level.

Hofschild dragged the Rams to a hoop every time they needed one most. She scored 27 points (a MW women’s title game record) and added six rebounds with six assists in the final. She averaged 19 points per game in the tournament and was named to the MW all-tournament team.

Murphy was held scoreless in the first half but blew up for 10 in the third quarter to help pull CSU back in it and finished with 12. She averaged 12.5 per game and also tied CSU’s single-season rebound record.

Atosu averaged 16 per game and hit 11 3-pointers in the tournament to also make the all-tournament team.

While the wound was still fresh less than 30 minutes after falling short of an NCAA Tournament bid, the team had already discussed what was next.

The Rams want to keep playing.

“Yeah. We talked about it already,” Murphy said. “If that’s an option, we want to stick with this group and keep trying to make a run.”

The WNIT is managed differently than the men’s NIT, and schools have to pay a fee to be part of the tournament, in addition to having a resume worthy of interest by the WNIT.

CSU athletic director Joe Parker said on the RamNation.com podcast this week that CSU had submitted an application to be considered.

“With their excellent run in the Mountain West Tournament, it’s pretty evident they’re under consideration after two solid wins against Wyoming and UNM,” said Jared Rudiger, director of the WNIT. “Right now, going into this week of basketball where so many things will be dictated in the next 72 hours or so, they’re sitting as a bubble team with 20 or 25 other teams in their same situation.”

Follow Kevin Lytle at twitter.com/Kevin_Lytle and at facebook.com/KevinSLytle. Coloradoan sports can also be followed on Twitter. Support his work and that of other Coloradoan journalists by purchasing a digital subscription today.