Stuck at home during lockdown, keeping busy with home improvement

Kristin Spitale, a wife and mom with two young kids, found herself feeling the monotony when the coronavirus lockdown smacked New Jersey in mid-March.

Wake up. Home-school. Make dinner. It was a far cry from her normal life which had included activities out with the kids, restaurant dinners and social gatherings.

“We were sick of being in the house and doing the same thing every single day, so we decided to get constructive,” said Spitale, who lives in Shewsbury. “I was so bored that I just thought, ‘There are a lot of projects I always wanted to do — so why not do it now?”

She certainly did. Within a few weeks, Spitale and her husband, Joe, built a jungle gym for their kids and a fire pit, refinished a dresser, installed permanent umbrellas around their pool, rebuilt a bicycle, created a custom hat rack out of a mirror and planted a vegetable garden.

Chatting with friends, Spitale realized she wasn’t the only one using this time to complete long-awaited home improvement projects. So, in mid-May, she created a Facebook group — Corona Creations — where people could share their projects and results. Already, it has nearly 500 members.

“We were doing so much and I had in passing noticed that some people were feeling the same way that we were – we’re stuck at home so this would be the perfect time to clean out the basement, etc. — and I thought, how cool would it be to all come together in one place and share all of the things that we’ve done?” she said. 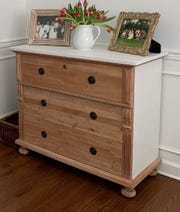 A chance to revamp

As anyone who drove past a Home Depot with a line out the door could guess, many people have used the past few months in lockdown as an opportunity to revamp their homes — the one place where they are now spending an unprecedented amount of time.

During the lockdown, Michael Delardo of Edison decided now was the perfect time to complete an array of home projects he and his wife, Michelle, had planned since they bought their home three years before. A homemaker, Delardo redid his kitchen and bathroom floors, installed a new vanity and sink, built a dog run, installed a fish pond with a waterfall, installed outdoor stairs and a gate and replaced deck boards — all while Michelle worked from home as a school nurse.

“It was stuff we knew we wanted to get done but with the kids and driving them here and there for this practice or that practice, we never had time,” Delardo said. “With everything shut down, we thought we should get these things taken care of now.”

He still might not be finished. “My wife always finds something new for me to do,” he laughed.

“As soon as it got nice in May, it was like a light switch turned on — transactions have been tracking up through May and June and now July, and we have definitely seen an uptick in home improvement projects and people working on their homes,” he said.

At Post Ace Hardware, an essential business which has been open throughout the lockdown, Massari said that their three focus categories — paint, garden and grilling —have all been up “very significantly” over the past few weeks. 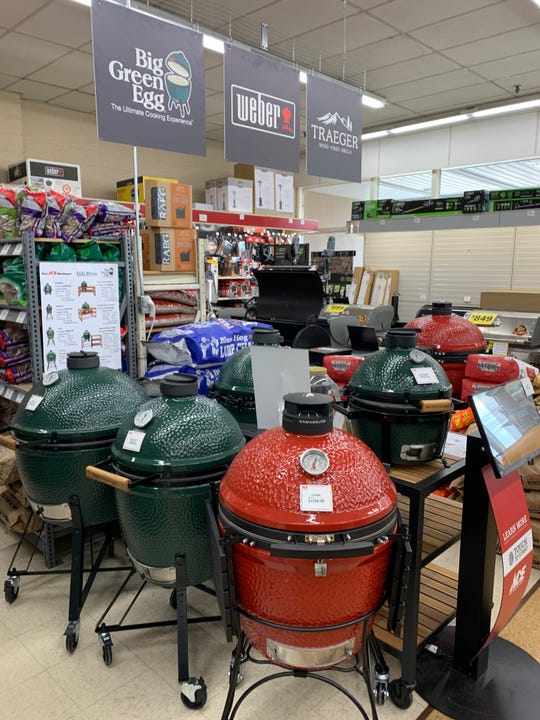 “People are stuck at home. They are painting bedrooms or houses and staining decks that they haven’t done through the years,” he said. “And grilling through the season has been extremely strong. Vacations are canceled and what better to do than hang out in the backyard and grill?”

Perfect time for an outdoor renovation

Jake Kinderman of Lambertville quickly realized he would soon be spending much more time in his backyard than he anticipated. With a 25-by-25-foot outdoor space, parks closed, an active three-year-old daughter and a son weeks away from being born, he and his wife, Colleen, realized some renovations were in order. 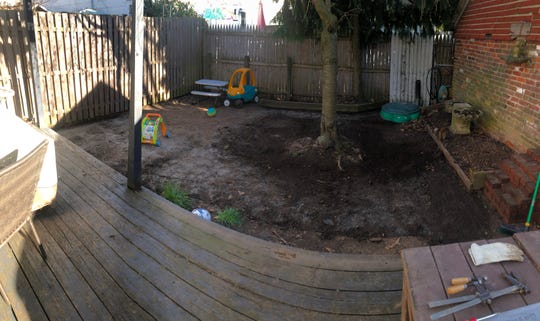 “We realized how stuck in the house we were about to be and we were assuming we were about to go crazy, so we wanted to save ourselves a lot of heartache,” Jake Kinderman said. “We have an extremely energetic daughter — I run her ragged every single day — and we needed to be outfitted for that.”

The couple began shopping for backyard jungle gyms, but couldn’t find any that they liked. So, Kinderman, whose job in concert management slowed down dramatically during the lockdown, decided to put some of his other skills to work and build his own.

One hundred and fifty hours and $3,500 later, Kinderman built a custom jungle gym with a rock climbing wall, monkey bars and a rope ladder. He then created a sitting space for the adults, took down a tree, painted the deck and the renovation was complete.

‘Half of it was therapy’

“To say this was difficult would be the understatement of the year,” Kinderman said. “But half of it was therapy. It takes your mind out of it so you’re too tired to linger on everything.”

Spitale found herself so stressed by the constant negative happenings that she even stopped watching the news for a bit.

“You turned on the TV and you saw how many people died, how many new cases there were and it was just so depressing,” she said. “These projects, though, made us feel good because we accomplished something and it took our minds off of what was going on.” 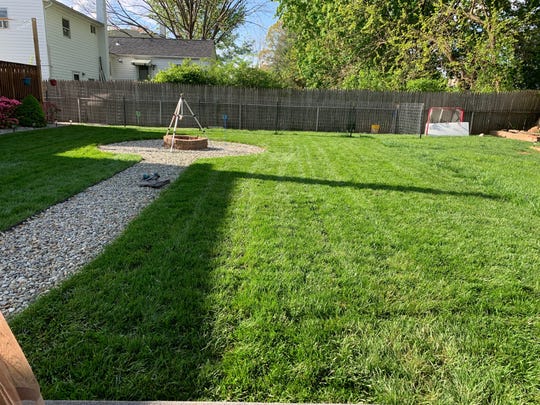 Delardo said his home projects made for an ideal stress reliever for him, too. “It kept my mind off what was going on and got me out of the house and away from the wife and kids each day for a little to go buy the stuff we needed, and I think that was a major part of it, too,” he said.

For some, home projects weren’t just a form of therapy, but a cheap one.

Cumberland County ReStore is a nonprofit home goods store which accepts donations of furniture and other home items, resells them at 50 percent of the retail price and then uses the proceeds to build Habitat for Humanity homes in Cumberland County.

Although their store was closed during the lockdown until June 15, they continued to accept donations through curbside pickup and then sold them on Facebook. Customers paid over the phone and then picked up their purchase. 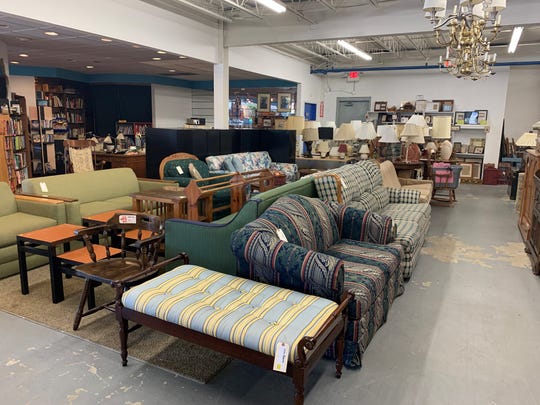 Without foot traffic, their sales were down, but “there were definitely people interested and wanting to be here,” said Stephanie Garay, store manager. “Especially during the stimulus check time, we did see an uptick in people wanting to purchase. Paint sales were up 30 percent because people were sick of looking at their walls.”

READ: Asbury Park home, once owned by the Woolworth family, restored to its 1880 splendor

Garay spoke with plenty of customers excited about their creative home projects, including a woman who chalk painted an old vanity and put a new cover on it; many people — more than normal for Cumberland County ReStore — who purchased hutches and then used the bottom parts to make buffet tables; one person who purchased a sleeper sofa and transformed it into a daybed in a window; and another person who purchased old chairs and made them into planters.

Even as the economy declined, though, Massari said at Post Ace Hardware, he didn’t notice any more bargain hunters than usual. 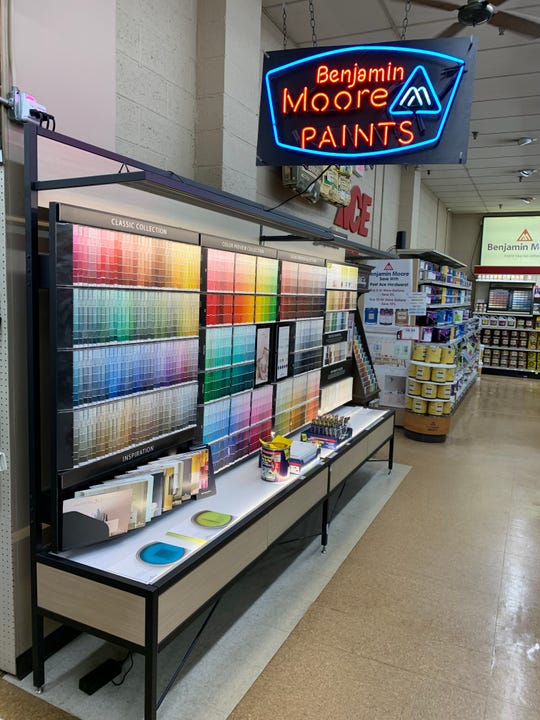 “People are always concerned about price and getting the best value, but my sense was they was just trying to shop more local and get the things they needed and weren’t completely concerned for price,” he said. “They were just happy to find what they were looking for, even if that meant paying a little more than they normally would.”

READ: No vacation, no problem: New Jersey residents getting creative with their outdoor spaces

Spitale said that since their family wasn’t spending money like they normally would on going out to eat, taking the kids to places such as Six Flags and even going on vacation — their May cruise was canceled — she finds the spending justified and they’re actually still saving money. By using materials she already had for some of her projects, Spitale only spent about $425 on all of them combined. 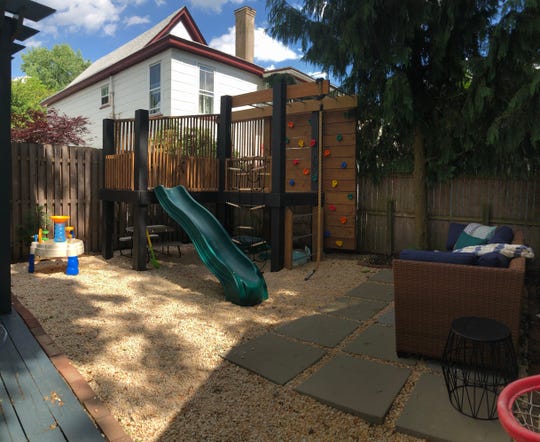 The Kindermans find their extra spending justified, too, despite their efforts to save as much as they can over the past few months.

READ: Outdoor movies: How to bring the big screen to a backyard near you

“As a household, we are saving everything, but this was the one exception,” he said. “The main motivator being not going crazy, we thought it was worth that cost. We decided it was worth it and it was something we had been needing to do, so it checked a lot of boxes. We have zero regrets.”

Jenna Intersimone has been a staff member at the USA Today Network New Jersey since 2014, after becoming a blogger-turned-reporter following the creation of her award-winning travel blog. To get unlimited access to her stories about food, drink and fun, please subscribe or activate your digital account today. Contact: [email protected] or @JIntersimone.

Any cookies that may not be particularly necessary for the website to function and is used specifically to collect user personal data via analytics, ads, other embedded contents are termed as non-necessary cookies. It is mandatory to procure user consent prior to running these cookies on your website.