The University of Wisconsin-Milwaukee owns some beautiful old upper East Side mansions but if things go the way university officials hope, it will have one fewer in its portfolio soon.

The university has listed the Alumni House, 3230 E. Kenwood Blvd., for sale (or lease) via a request for proposals process, the details of which you can see here.

The three-story, 25,553-square-foot Tudor Revival home, with 14 bedrooms and 175 feet of lake frontage on its 3.9-acre property is assessed by the City of Milwaukee at $1.93 million.

With its sprawling lakefront site across the street from Lake Park, one would guess the real estate value to be considerably higher.

If it does sell the property, that would make at least a small dent in the deficit UWM is facing.

On Thursday, WUWM-FM quoted Vice Chancellor of Finance Robin Van Harpen as saying, “In total we’re anticipating that the impact of COVID-19 on our overall [Fiscal Year 2021] budget would be a net deficit of somewhere between $25 and $54 million.” 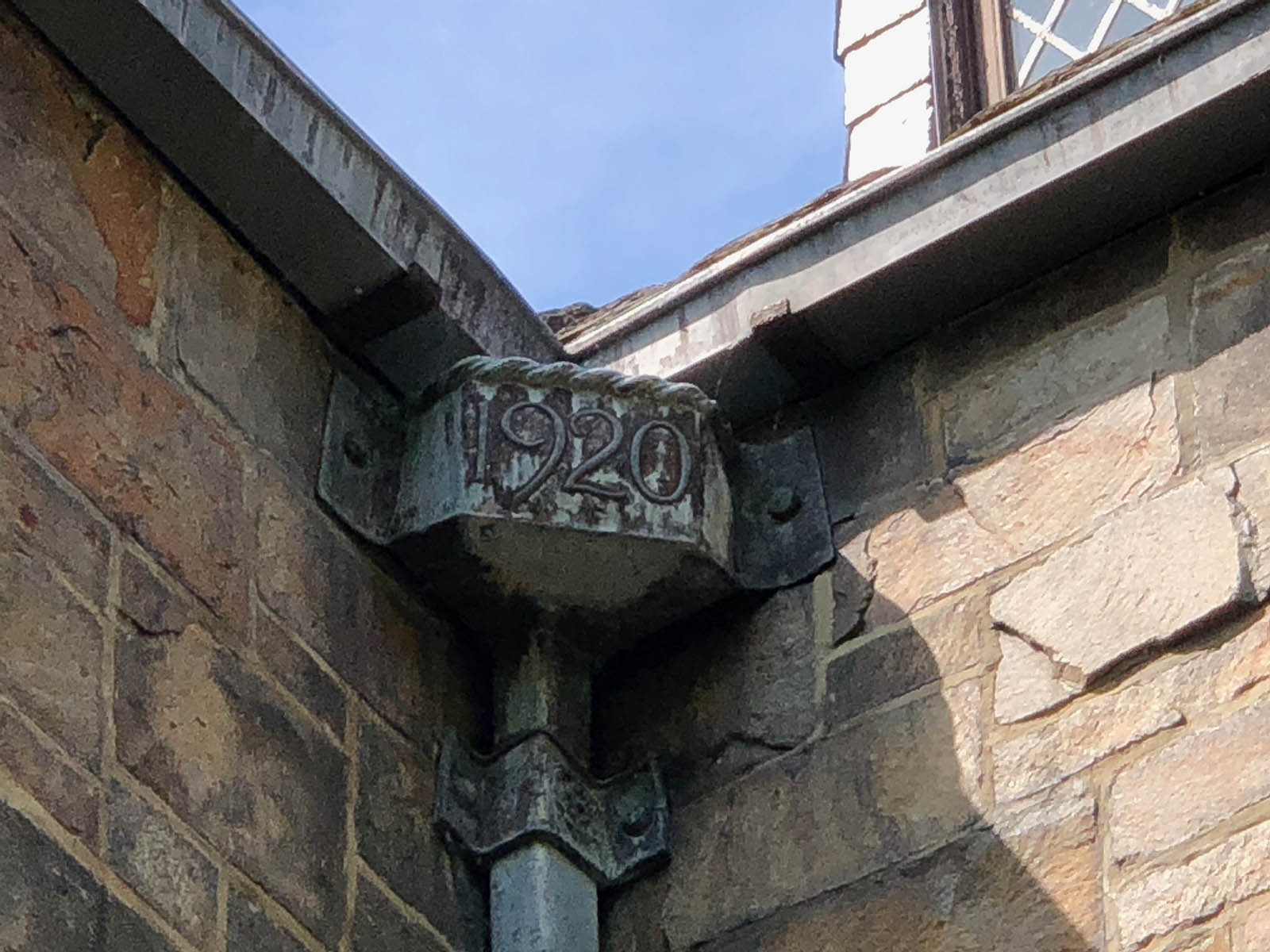 Built between 1920 and ’23 for Milwaukee businessman Myron MacLaren, the Milwaukee Teachers College – the predecessor of UWM – bought the house for use as a women’s dorm in 1949.

In 1964, by which time the school had transformed into UWM, the house was converted to conference space. 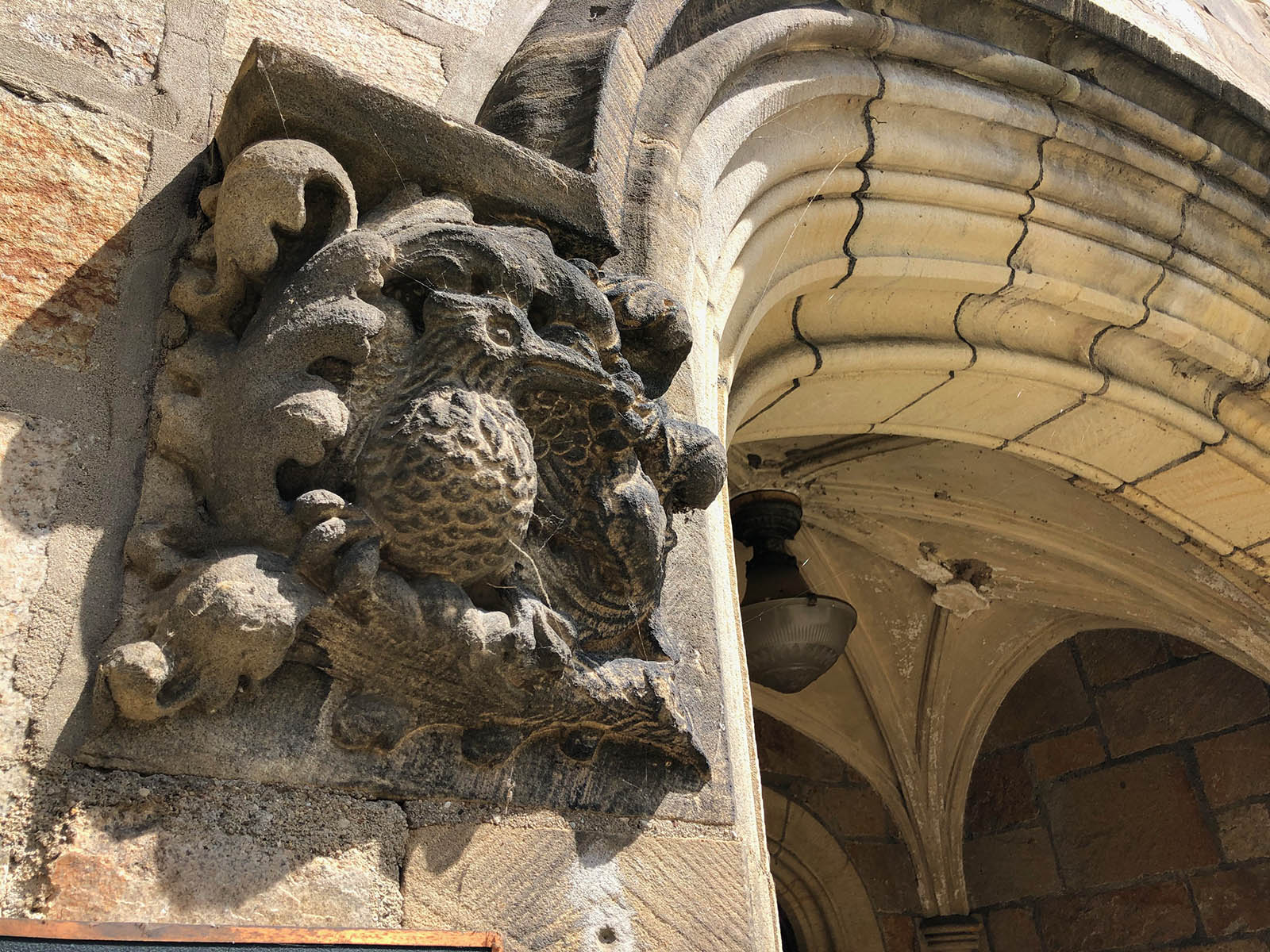 The house was designed by Fitzhugh Scott, who I recently wrote about in this story about the Washington Park bandshell that he also drew. 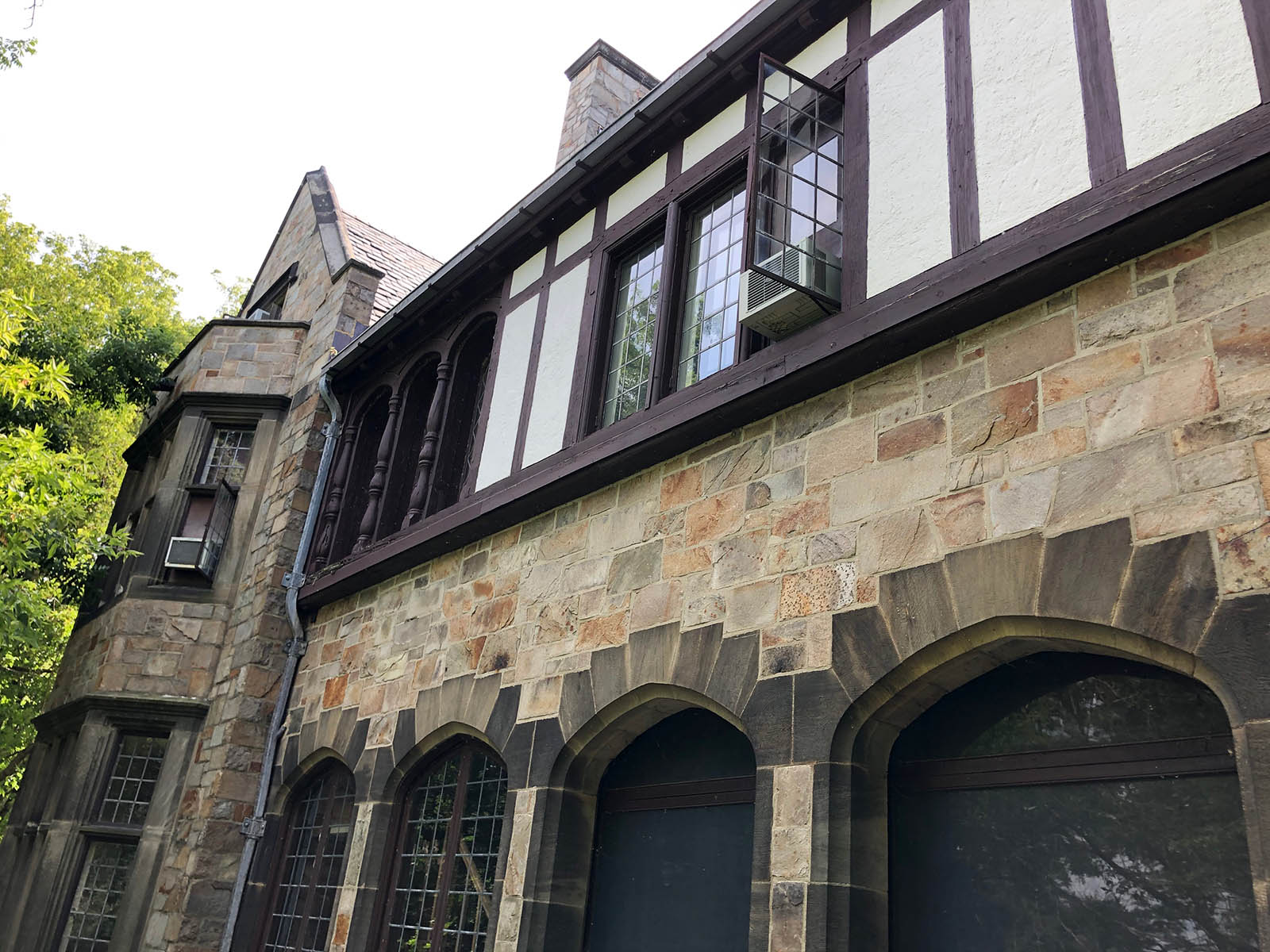 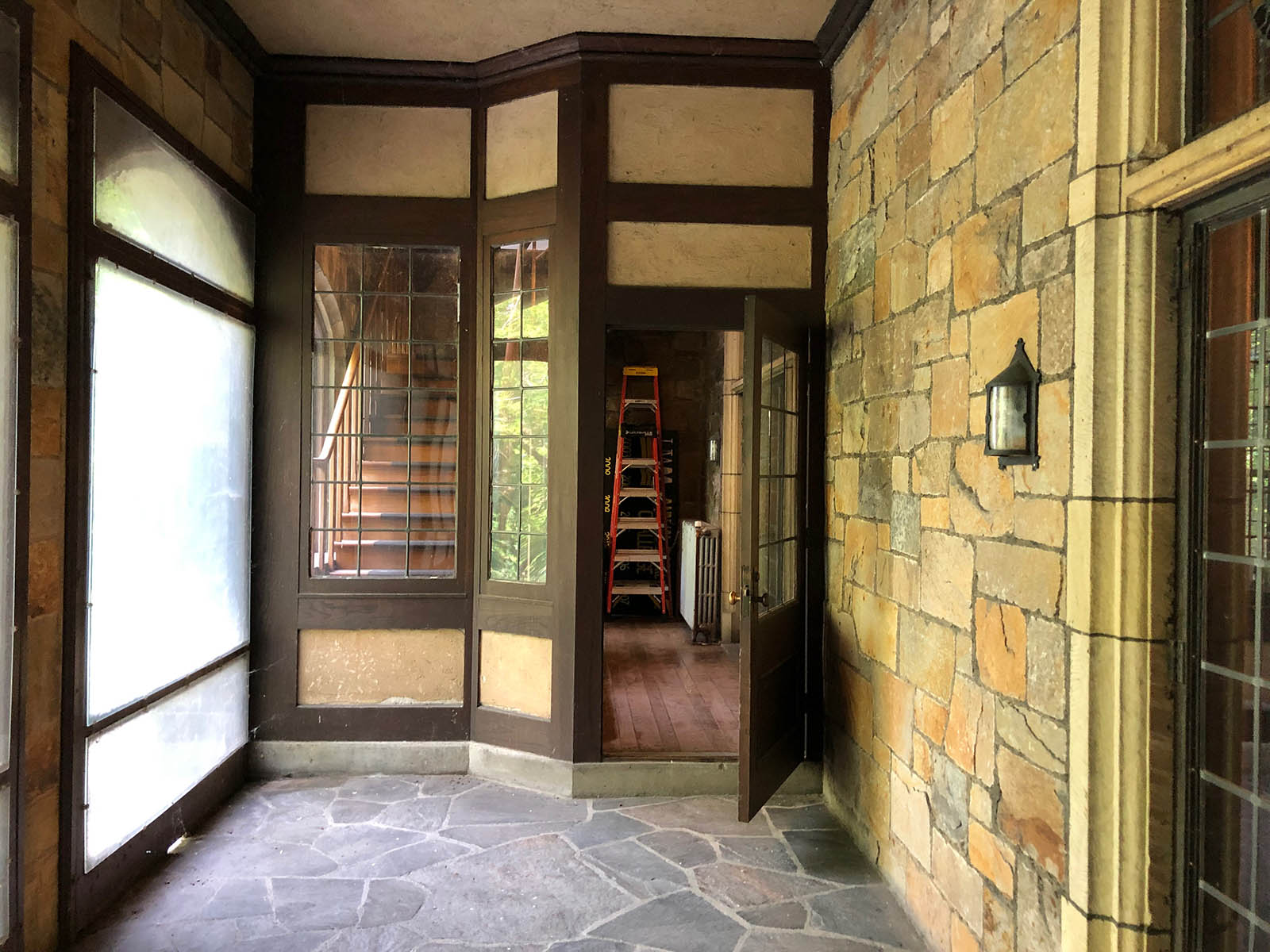 A Historic Designation Report prepared by the city’s preservation office expanded on that, boasting, “the exterior of the house if finely crafted of high quality materials and displays many hand wrought decorative features. Among the outstanding materials evident are the imported Plymouth stone exterior cladding, the superb slate roof laid in the authentic English late medieval manner of using extraordinary thick rough-hewn slates at the eaves tapering to thinner smaller slates at the ridge and the hand forged lead rainwater heads, gutters and downspouts. 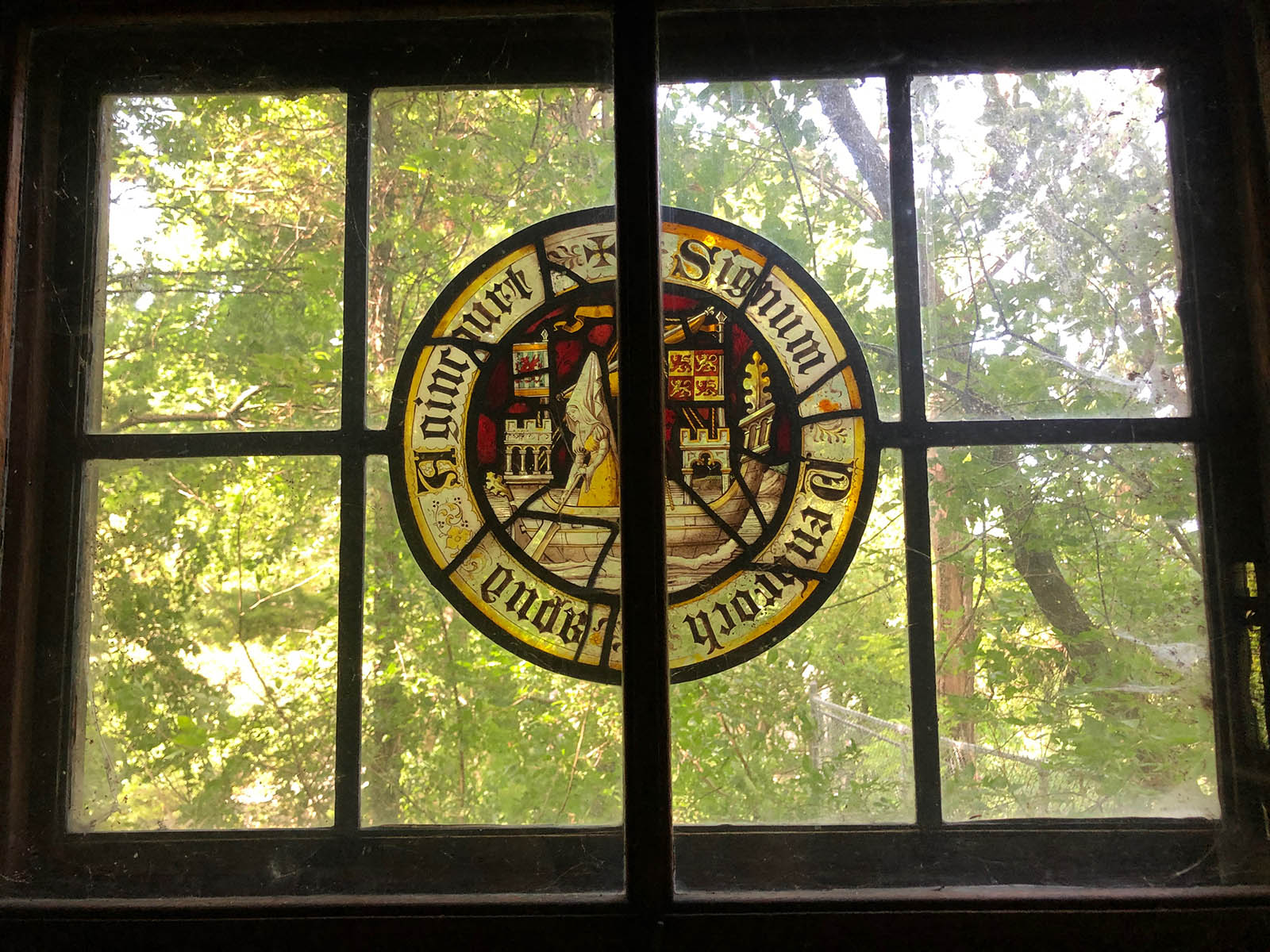 MacLaren was born in Milwaukee in 1886, the son of a Gimbels department store general manager, who also worked in the insurance business. He got his start as a teller’s assistant at the Fidelity Trust Company, later selling bonds before becoming VP of Fox Hoyt & Co. bond and mortgage brokerage in 1916.

After marrying the widowed Gertrude Schlesinger Roller in 1918 (it was also his second marriage, apparently), the MacLarens moved into a home at 2015 N. Lake Dr. and soon tapped Scott to design them a new home, which was constructed with a few starts and stops. 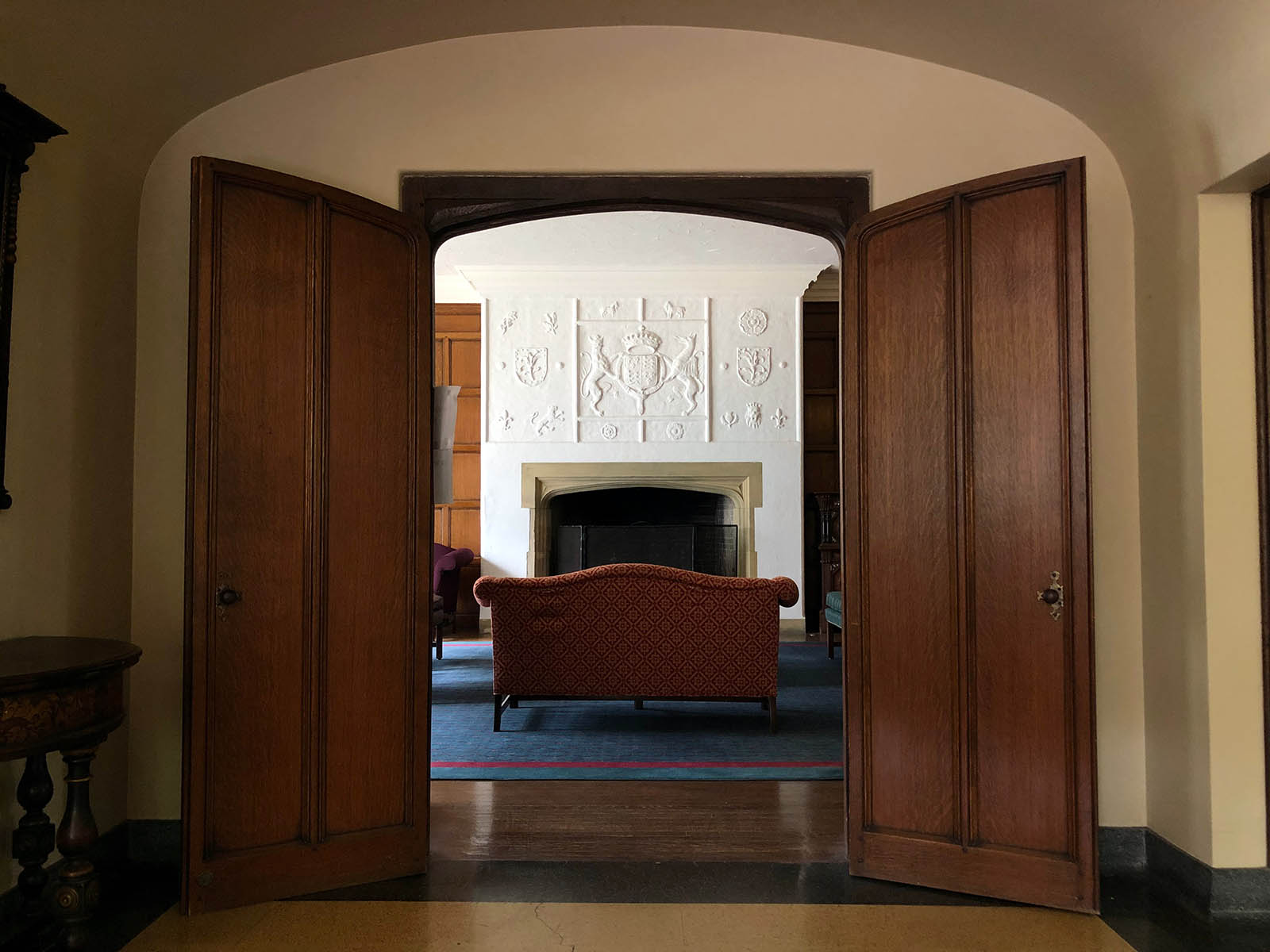 The city report describes the process:

“The permit for the impressive Tudor Revival house was taken out on July 19, 1920, and the permit shows that the estimated construction cost was $85,000 although the house actually cost several times that amount to complete. Work on the foundation was finished by August and contractors had reached the third story by late November of 1920. Work was delayed the following spring, possibly due to the death of Gertrude’s father, Ferdinand Schlesinger, who passed away while en route to California on Jan. 2, 1921. It is likely that part of the Schlesinger fortune went into the construction of the Kenwood Boulevard mansion.

“Work on the mansion began again in June of 1921 when the roof was put on and during the remainder of the year the stone veneering was applied and the windows were installed. The finish work on the house slowed in early 1922 and did not resume in earnest until June. Floors were tiled, the chimney was built, and plumbers and electricians were at work on the interior while some interior trim was applied. Plastering was also begun. Finishing work on the interior took most of the spring of 1923, and the city’s building inspection department approved the completed building on June 21, 1923. A temporary two-car garage was built later for $500 in 1936.” 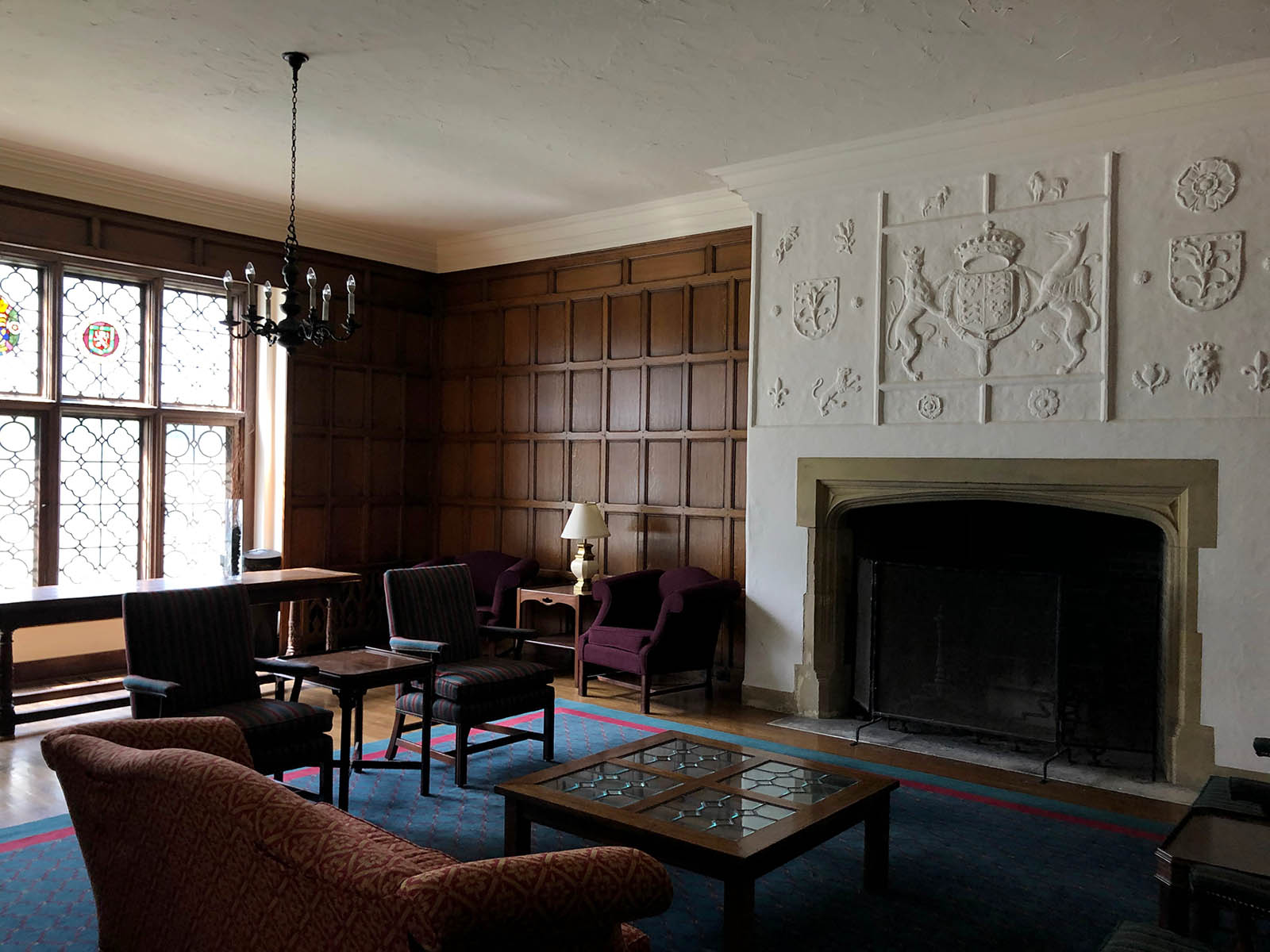 As the house was finished, MacLaren – who in 1922 had been elected president of the Milwaukee Country Club – became the first veep of the Mitchell Street State Bank.

But there was soon trouble in their new Tudor paradise and the MacLarens separated in 1926 and divorced in ’27. While Myron moved to the Astor Hotel, Gertrude kept the house and when she married Clifford McMillen in 1928, her new beau moved in, which had to have stung her ex-husband, who remarried – to Mary A. Stock – in 1930 and moved to a Lake Drive home in Whitefish Bay and, later, to 1347 N. Prospect Ave. 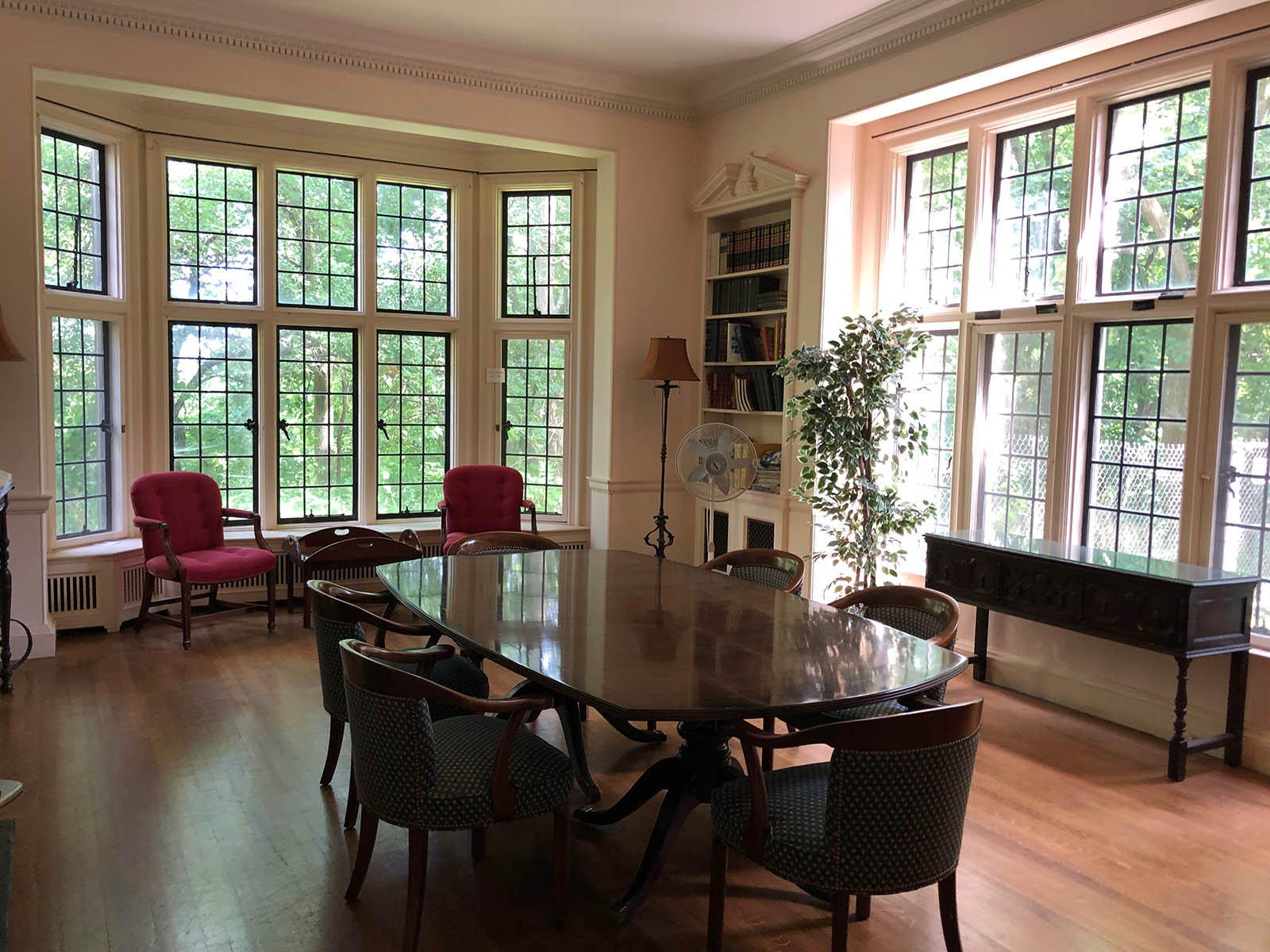 But in an unexpected twist, both Myron and Gertrude were again single – she divorced and he widowed – by 1935 and the two got married again! Myron moved back home, where parties around the pool sometimes made the society column in the newspapers.

Myron died in the house in 1941, and Gertrude lived there until she married Theron C. MacLeod in 1947, and left Milwaukee for Los Angeles in 1948. (Later, Gertrude would divorce MacLeod and marry Douglas Parmentier.)

In 1949, she sold the home to the Teachers College for $75,000, with the college kicking in another $5,000 for some of the furnishings. The remainder of the furnishings were sold at an invite-only sale in March 1949 that drew hundreds.

“Most came in search of ‘little things’,” wrote the Milwaukee Journal, “hoping to find a rare book or two, a choice art object, some antique silver, small pieces of furniture or bargains in oriental rugs. First to go was a page from a Gutenberg Bible.”

I got a chance to see inside the house this week.

Outside, it’s quite stunning, with its orange-hued stone cladding (which a June 1923 Journal article described as “Lannon stone,” limestone from Waukesha quarries), leaded windows, slate roof and striking chimneys.

There are also lots of little details, including decorative scuppers and downspouts – one of which prominently bears the date 1920 – carved stone animal details and more. 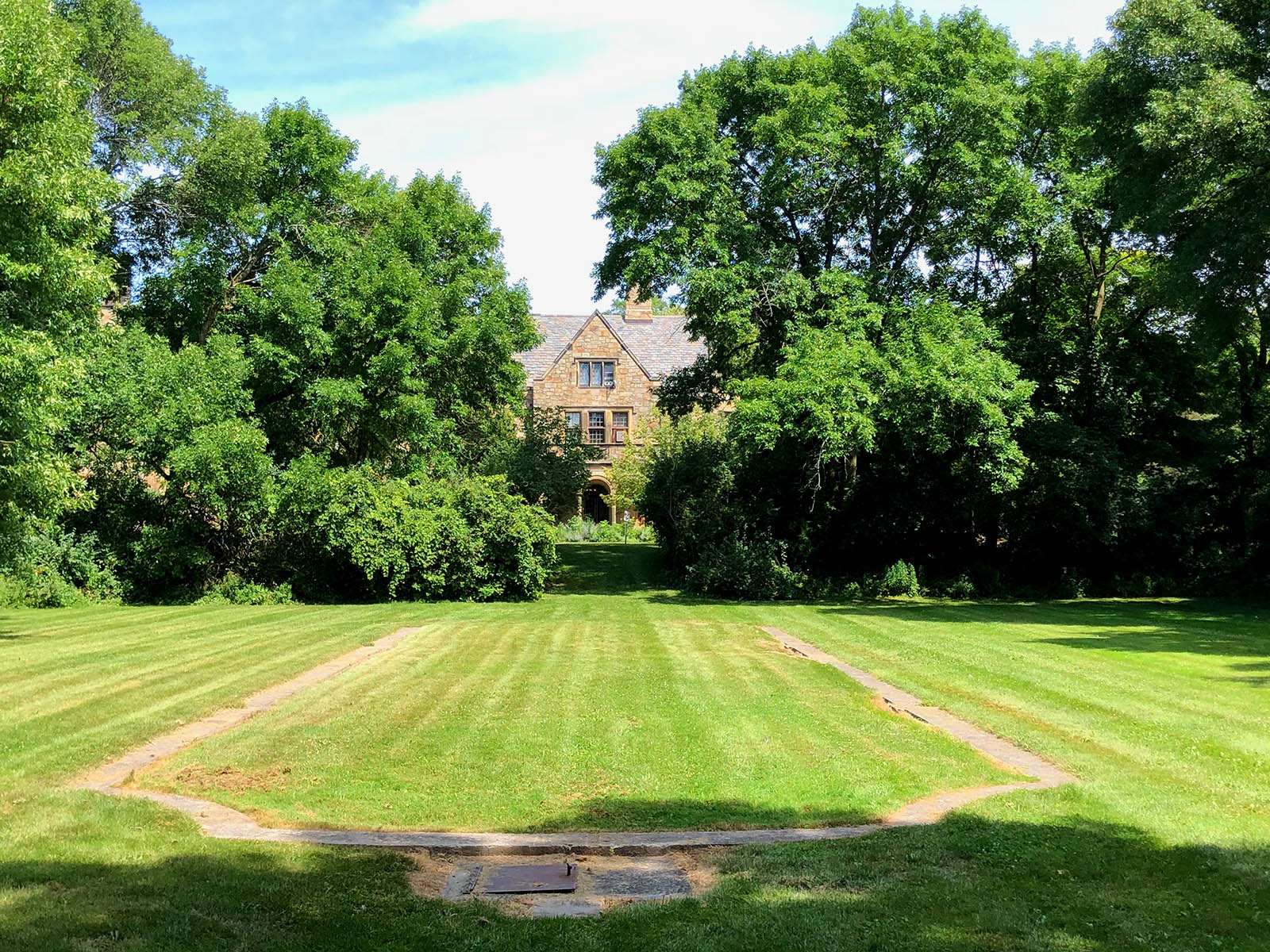 Across the drive front is a large recessed area that used to be a sunken garden with the now-filled-in pool still delineated in stone in the grass. The entire space is walled and at the far end there is a double stone staircase leading up to another large grassy area. 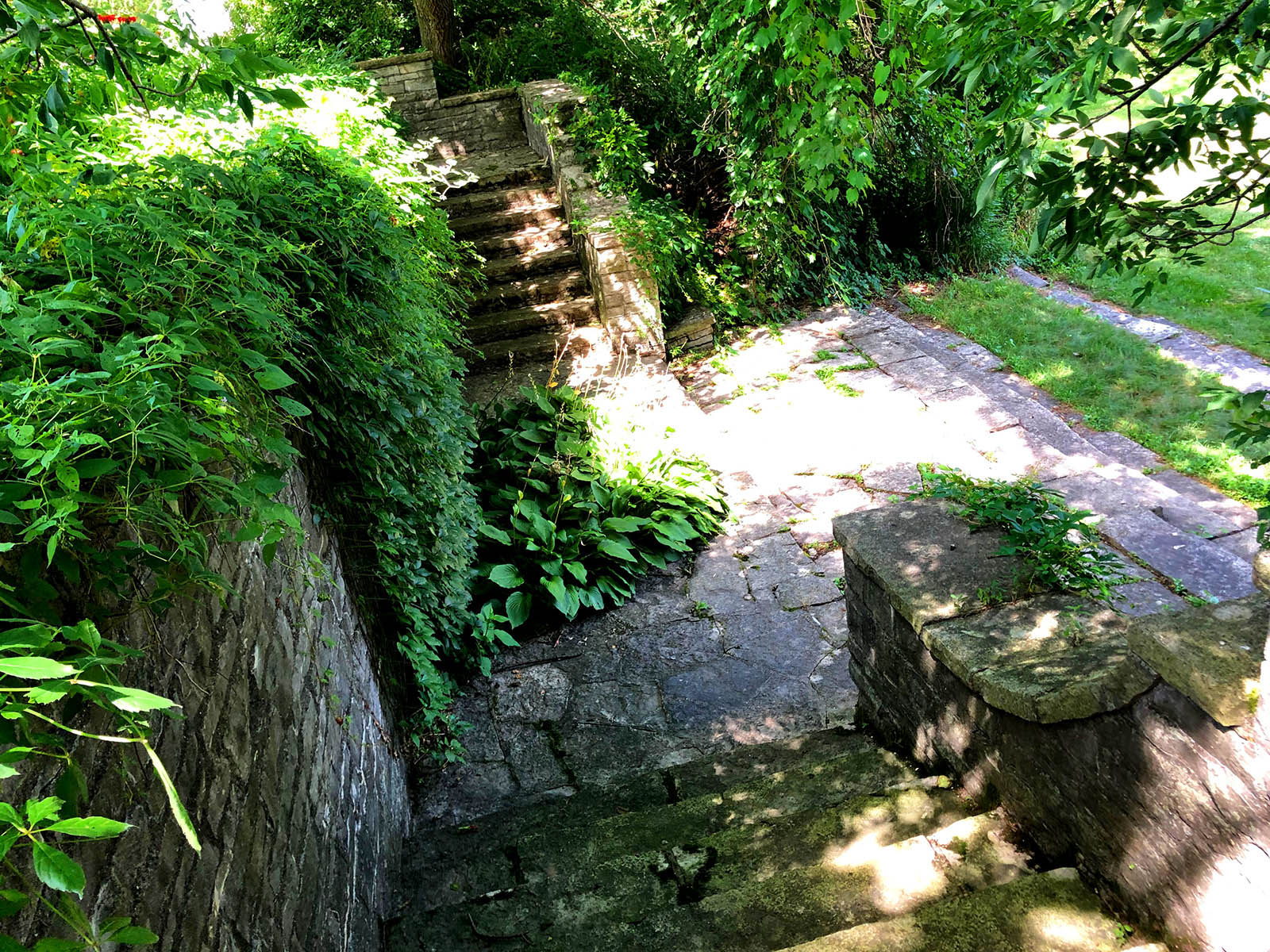 Inside the house, the layout appears mostly unchanged from the building’s time as a private home, other than a second staircase (pictured below) that was wedged in at the back when the place was a dormitory. 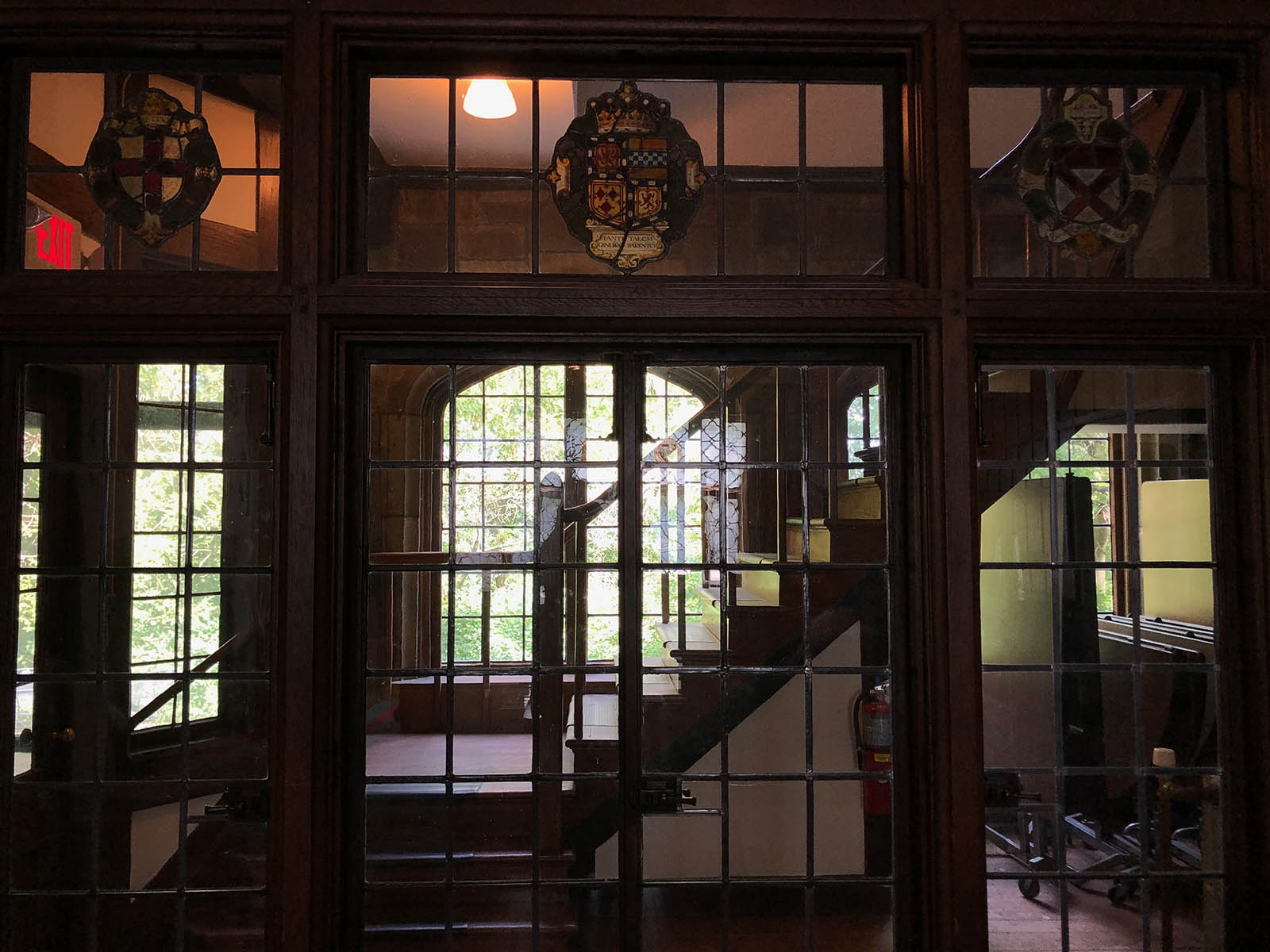 Remove a few dropped ceilings and institutional fluorescent light fixtures and, voila, the place would be somewhere you’d love to call home, with a broad main staircase with handsome newel posts and balusters that almost conjure a row of soldiers charged with supporting the balustrade.

There are plaster details, two original kitchens, some regal fireplaces and plenty of rooms of all shapes and sizes. 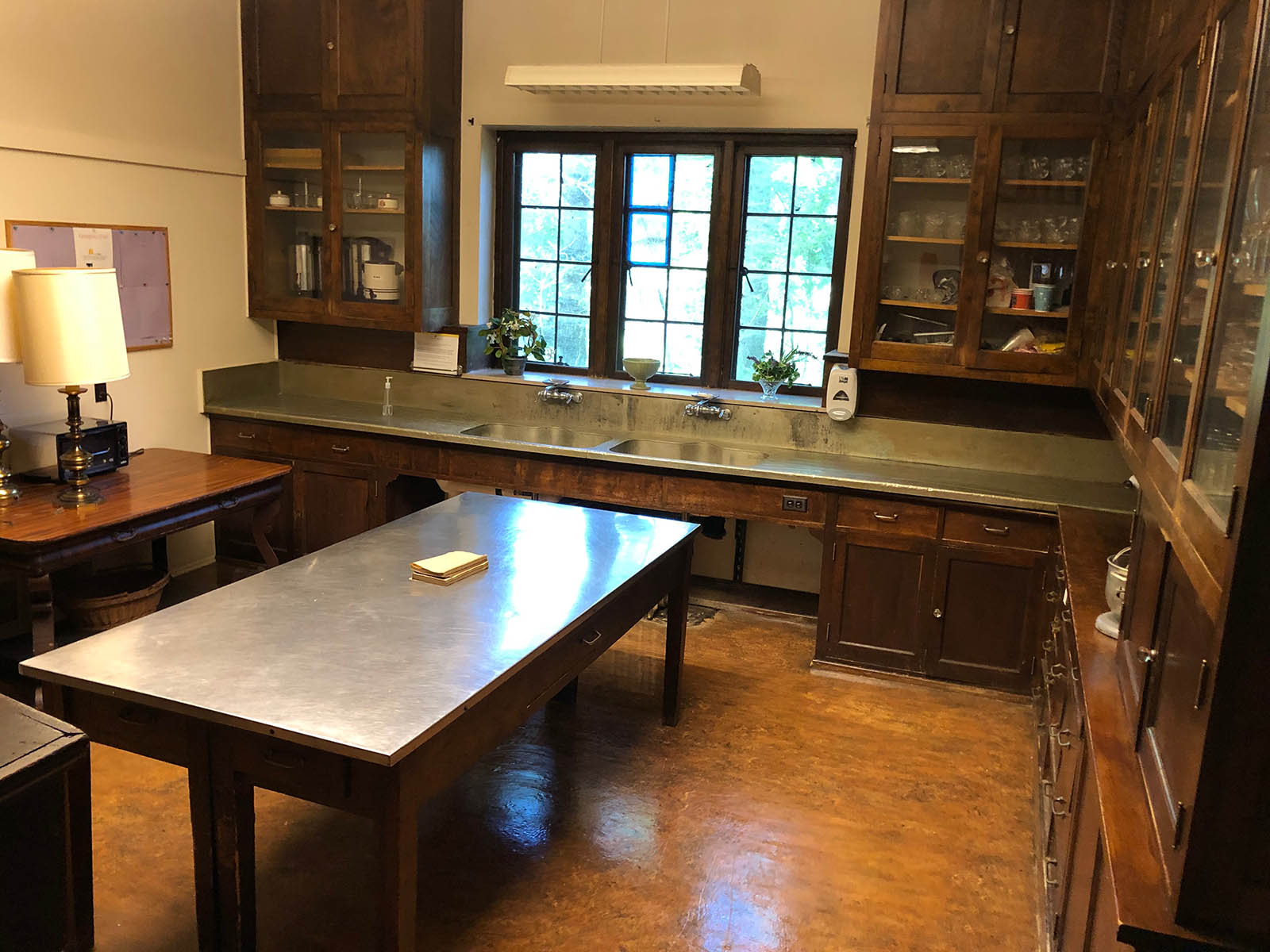 The many second floor bedrooms and third-floor servants’ quarters are used as offices now for a variety of UWM staffers in different departments and a space just off the kitchen downstairs is home to the Innovative Weather Center.

Karen Wolfert, a senior architect in the university’s Campus Planning & Management department, tells me that the building has also been used as surge space, where offices could be temporarily relocated while work was being done in other buildings on campus.

It’s also been used for meetings and conferences.

Wolfert says a number of proposals have already been received ahead of the deadline of 4 p.m. on Aug. 5. Some, she said, have come from developers, and others from individuals considering turning the property back into a private home. One, she said, suggested use as a children’s day care facility, but it was unclear if that one was a formal proposal.

The mansion is zoned residential and is designated as historic by the City of Milwaukee, which means exterior changes require permission from the city’s Historic Preservation Commission. 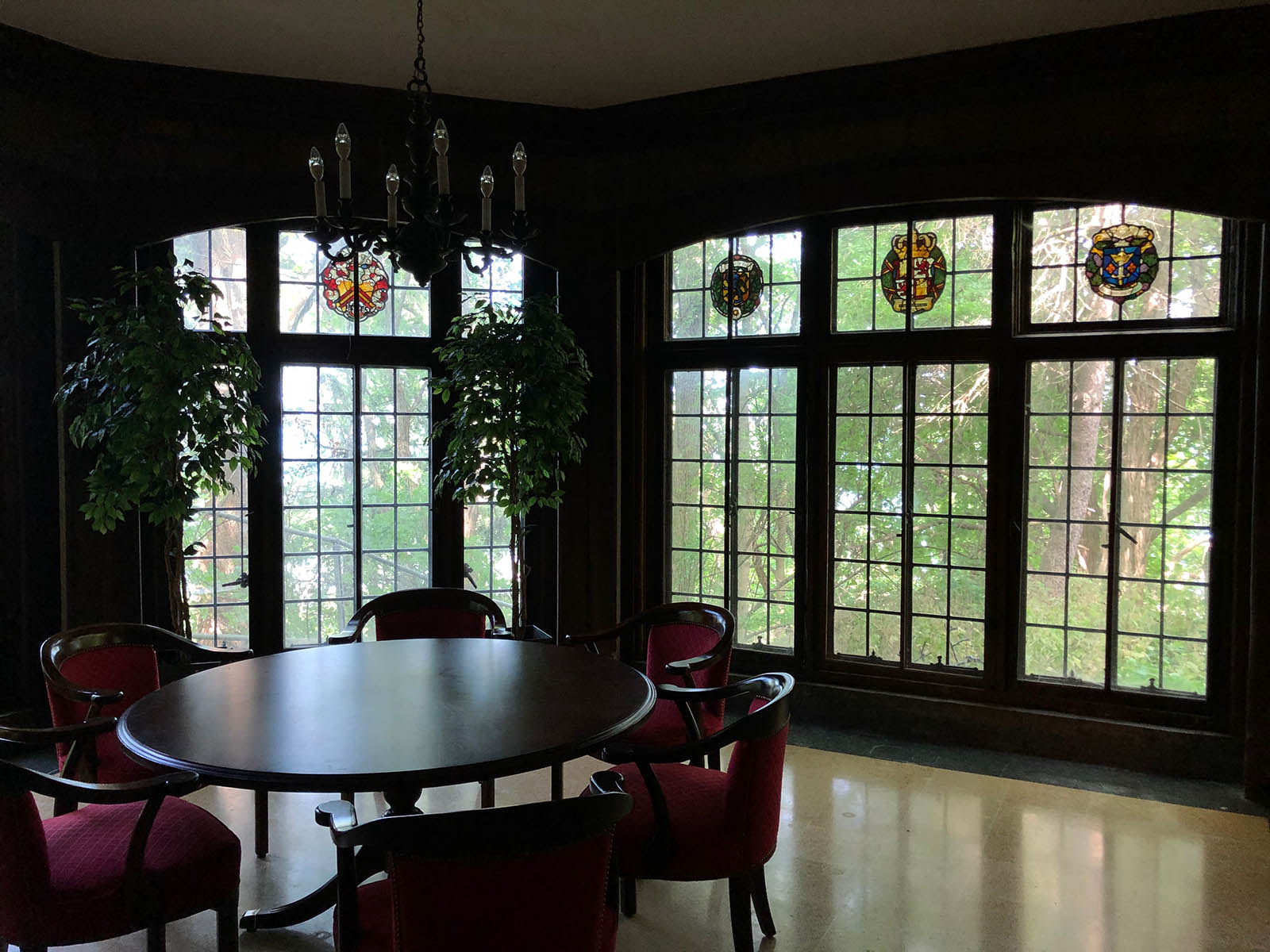 It also sits on the bluff atop a lakefront site on which UWM has a pumping station that uses lake water to cool the buildings on campus.

According to Wolfert, any deal for the property will include an easement for that to continue. Other than a few pipes at the top of the bluff, there is little evidence of the system around the upper part of the property.

It seems a small concession to make to live in a home as gorgeous as this on a sprawling bit of upper East Side real estate, enclosed by a wall, with lake frontage (and a staircase that leads down).