Year in Labor: A look into MSU’s relationship with campus workers 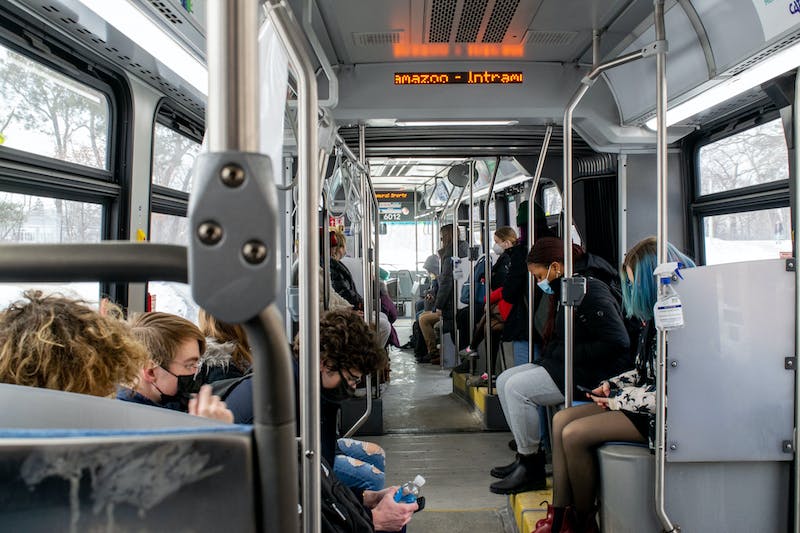 The university had to change its approach in dealing with the shortage of dining hall workers, contract negotiations with a union on campus and mitigating the effects of a shortage of workers that they have little control over.

Where are the dining hall workers?

MSU gained national attention in October 2021 after an email was sent to faculty members and other employees asking them to volunteer in the dining halls.

“Like other schools and universities across the country, MSU’s Culinary Services is experiencing severe staffing shortages,” the email said. “Faculty and staff are invited to sign up to assist in dining halls with specific needs during evenings and weekends.”

While this was one of the most prominent and student-centered issues of labor shortages, this move followed the decision to close two dining halls and reduce hours of operation in others, which was met by a fury of letters and petitions written by students and parents.

Chief Communications Officer for the formerly Residential Hospitality Services, now the Student Life and Engagement, or SLE, Kat Cooper said that over the past 10 years, MSU has seen a decrease in students applying to work in dining halls. She said many students have told SLE they are more interested in getting work and experience in the field of work they are pursuing.

Cooper points to three trends that have affected dining hall staffing: fewer students choosing to work, older workers starting to retire and the halls needing to restaff in such a short period of time.

“The thing that happened with us is that we needed to go from zero to 100 overnight,” Cooper said. “It’s taken us longer to ramp up to full employment and we’re not there yet, but things are getting better all the time.”

Cooper said starting wages for “dining roles” range between $12 to $15 per hour, which she believes is a market-competitive wage. For the jobs currently listed on the SLE recruiting website, few have the starting wage stated in the job description. Of the jobs related to culinary services with a wage listed the highest-paid starting wage is $13.50 per hour.

As for the decision to email the faculty and staff for help staffing the dining halls, Cooper said SLE administrators decided to send out an email after the administration had heard people from the university asking if help was needed.

Many faculty members and staff reacted negatively to this decision. President and Chief Negotiator for the Union of Non-Tenured Faculty, or UNTF, Kate Birdsall said she thought the email was a joke at first.

“If I am working 60 hours a week to make sure that my students have a good experience and learn stuff, when exactly am I going to volunteer at Brody?” Birdsall asked.

Birdsall said the best way for SLE to end the shortage of dining hall workers is to raise pay to $20 an hour and add benefits.

The mass exodus from jobs in the foodservice industry was not only at MSU. According to the Bureau of Labor Statistics, the three highest quit rates in the leisure and hospitality industry all happened in 2021, with September being the highest at 6.4%.

Cooper said there were discussions to raise wages higher when SLE emailed asking for volunteers, but said SLE could “afford to be competitive” but not raise wages more than that. SLE, she said, is a self-sustaining division within MSU, receiving all of its money from room-and-board costs.

A friendly approach with UNTF

Another high-profile issue the university takes on is its relationship with UNTF. Fall 2021 saw the UNTF, the Graduate Employees Union, or GEU, and a handful of other progressive student groups like the Young Democratic Socialists and Spartan Solidarity Network hold multiple protests about the safety measures for COVID-19.

One of the highest-profile instances of this was the “Wide Awake” protest outside of the Cowles House, President Samuel L. Stanley Jr.’s residence. At this protest, Birdsall called the COVID-19 situation “untenable and unsafe.”

A month after this protest, the GEU and UNTF gathered again for a “Die-In” outside of Stanley’s office. The demands of this protest included transparent communications about COVID-19 plans and options to shift the modalities of lessons from in-person to online.

The UNTF will negotiate its new contract with MSU this spring. During the collective bargaining process, Birdsall said they plan to address a number of issues, such as workload definitions, title designation and pay.

Birdsall said seeing Michigan State Head Coach Mel Tucker’s new, record-breaking contract alongside their cut salaries has helped put the morale of union members into the gutter. She understands that academics and athletics are different accounts at MSU, but said she is not convinced money cannot be moved around.

“We know when we have people, particularly at the instructor level, so people who have a master’s degree but not a Ph.D., who have been here for 15 years and make $40,000 a year to teach tons of freshman and sophomore students,” Birdsall said. “For them to see that, it just kind of boggles the mind. … Stuff like that sends a very clear message when it’s not accompanied with, ‘OK, yeah, we agree your salary sucks. We want to help you fix that.’”

“It’s interesting, the university sure likes to tell us they don’t have any money,” UNTF organizer Richard Fessler said. “And then they sure like to spend a lot of money on things that aren’t educators. So, that’s just one of those things where I think the university generally shows what it values by how it allocates its budget.”

Meanwhile, according to the National Center for Education Statistics, MSU’s average pay for instructors, assistant professors and associate professors was lower than average for other Big Ten Schools.

Despite the protest about COVID-19 procedures and frustration with pay, Birdsall said the relationship between the administration and the union, while sometimes rocky, is overall positive and productive.

The Office of Faculty and Academic Staff Development seems to have taken on a new outlook for how it is choosing to work with the UNTF. In an event put on by the office on Feb. 23 called “Thriving in the Tenure System II: Transitioning from Associate to Full Professor,” Birdsall said the administration members in the meeting, including Provost Teresa Woodruff and Interim Associate Provost for Faculty and Academic Staff Development Marilyn Amey, were very positive and friendly about the fixed-term faculty and about the UNTF during the program.

Birdsall said Woodruff made a comment about wanting to make “MSU 2.0” and that during the meeting, Birdsall was given a chance to speak.

“When I saw the notice of (the meeting), I initially was annoyed, because it’s like ‘Why wasn’t my union invited to talk,” Birdsall said. “And they were like, ‘Yeah, sure, we’d love to have you.’ So, I gave them an infographic and they shared it, and it was a really positive moment.”

A shortage of CATA drivers

In late January, MSU, along with the Capital Area Transportation Authority, or CATA, announced that after classes move back in-person, CATA bus routes would operate at a reduced level.

While MSU is only a member of the CATA and is not directly responsible for the issues the group faces, the reduction of bus routes on campus has been one of the biggest ways issues of labor shortages impacted campus life.

One of the reasons for the reductions in route frequency is because of a shortage of transit workers, MSU Deputy Director for MSU Police and Public Safety John Prush said. Throughout the state and the country, public transportation riders have faced longer waits because there are not enough bus drivers to sufficiently staff transit authorities.

Prush, who is the representative for MSU on the CATA Board of Directors, said CATA is short drivers because there are none to be hired and because the pandemic, particularly after the holiday season, has led to many workers calling in sick.

Prush said the reduced route frequency was not something CATA or MSU chose to do, despite rumors that say otherwise.

To mitigate the effects of CATA’s reduction of campus services, Prush said MSU decided to help alleviate demand for buses by providing complimentary parking at metered parking structures on campus through spring break.

A possible factor for why CATA is having trouble finding new workers and possibly retaining old employees is its contract negotiations with the Amalgamated Transit Union, or ATU, Local 1039. For over two years now, CATA and the ATU Local 1039 have gone through the collective bargaining process, using bridge contracts to last until a permanent one is agreed upon.

However, in April 2021, CATA took drastic measures to attempt to move along with negotiations by eliminating retirement healthcare for new hires, changing overtime policies and moving the annual pay raise to 3%.

Neither CATA’s spokesperson nor ATU Local 1039 President Steve Soliz wished to comment on this story.

Prush did not go into details about the plan if CATA is not able to find enough drivers to bring operations back to normal at MSU.

“I’m staying optimistic, and we’ll cross that bridge when we get there,” Prush said.

This story was featured in our March 15 print edition. Read the full issue here.

Share and discuss “Year in Labor: A look into MSU’s relationship with campus workers” on social media.